As part of our first Jean Monnet debate, JMCM was pleased to welcome M. Paul Magnette, Minister-President of the Walloon Government, who gave a talk on how to avoid the European Union disintegration [in French]. The talk was followed by a reception to launch the new JMCM, during which we announced the two winners of the Jean Monnet Awards 2017. 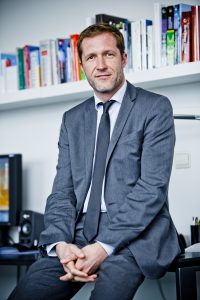 Paul Magnette received a mandate from the Fund for Scientific Research (FNRS) to prepare a doctoral thesis on European citizenship that he defends in 1999. He then becomes a research fellow at the FNRS (1999-2001) and then professor of political science and Director of the Institute of European Studies at the ULB (2001-2007). Together with Pascal Delwit and Jean-Michel De Waele, he simultaneously creates the Center for political studies (CEVIPOL) of the ULB.

As a guest at many universities in Europe and North America, he publishes thirty books, receives several scientific awards (including Jean Rey, Alumni, Franqui, Emile Bernheim) and participates in numerous international conferences. He is regularly invited to analyze the political news in the Belgian and French media, and is recognized as being one of the best experts of the European Union.

In 2009, Paul Magnette is elected to the Walloon Parliament. He becomes senator in 2010 and is appointed Minister of Public Enterprises, Scientific Policy, Development Cooperation, in charge of Larger cities in December 2011. He becomes Commander of the Order of Leopold. In October 2012, he wins the local elections in Charleroi, Wallonia’s largest city. He takes his mayor office in January 2013. On the same date, he is appointed Acting President of the Socialist Party. He is re-elected to the Walloon Parliament in May 2014 with 49,978 preference votes. Since 22 July 2014, Paul Magnette is the Minister-President of the Walloon Government.