The majority of papers in Europe’s Eurasian Challenge are based on the PONARS Workshop “EU-Eurasian Relations at the Crossroads”, held with the EU Centre of Excellence at McGill University in December 2016. Download the volume here. 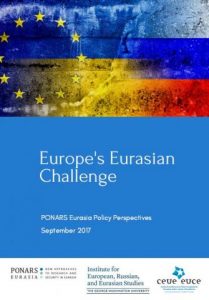