The Leaking Union: Explaining the EU’s Leaks in International Negotiations

International negotiations are founded on secrecy. Yet unauthorized leaks of negotiating documents have grown common. What are the incentives behind leaks, and what are their effects on bargaining between states? Specifically, are leaks intended to spur the other party to make more ambitious commitments, or are they more often intended to claw back commitments made – are leaks offensive or defensive? We examine these questions in the context of trade negotiations, the recurring form of which affords us rare empirical traction on an otherwise elusive issue. We assemble the first dataset of its kind, covering 120 discrete leaks from 2006 to 2015. We find that the incidence of leaks is indeed rising across negotiations. Leaks are clustered around novel legal provisions, and appear to be disproportionately defensive: they serve those actors intent on limiting commitments made. The European Union appears responsible for the majority of leaks occurring worldwide. Using party manifesto data to track changing ideological positions within the EU, we find that the occurrence of leaks is highly correlated with opposition to economic liberalization within the average EU political party. Moreover, leaks appear effective in shifting public debate. We find that the same negotiating text attracts more negative coverage when it it leaked than when it is officially released. In sum, political actors leak information strategically as a response to changing domestic preferences, in order to shape negotiations towards their preferred outcome. 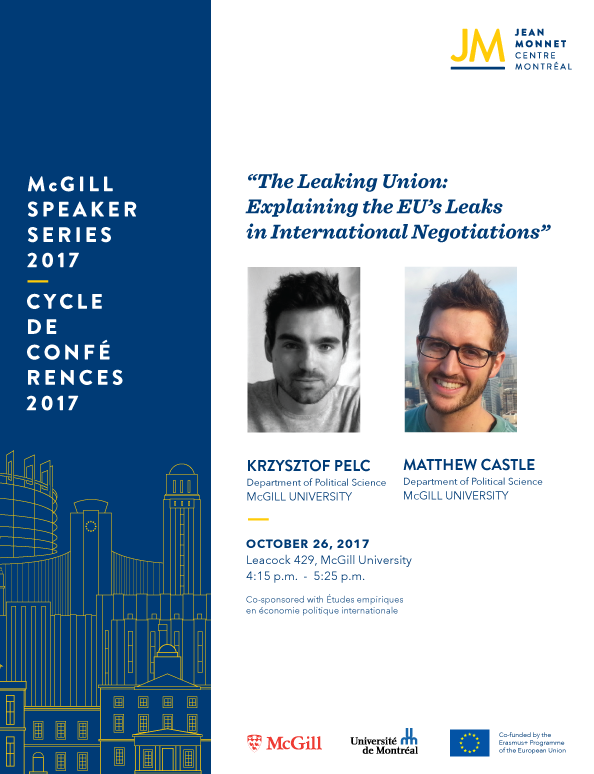 Previous post
Catalonia: What if independence is not recognized by Madrid?
Next post
“Greater European integration to face global challenges: the reception of migrants and refugees