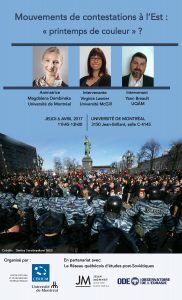 In the wake of the recent protest waves that surged throughout Russia and Belarus, this roundtable will discuss their eventual consequences for the post-Soviet regimes and societies. Do we see emerging a new Color Spring, similar to the Color Revolutions that occurred in Georgia (2003), Ukraine (2004), and Kyrgyzstan (2005) before abruptly stopping in Uzbekistan (2005) and Belarus (2006)?

Virginie Lasnier, PhD Candidate at McGill University, will address the Russian case while Yann Breault, Lecturer and Researcher at UAM, will discuss Belarus events. Magdalena Dembinska, Professor in Political Science at UdeM, will act as the Chair and Discussant, bringing the comparative angle to the discussion.