RevUE of the Cas Mudde conference proposed by Léandre Benoit 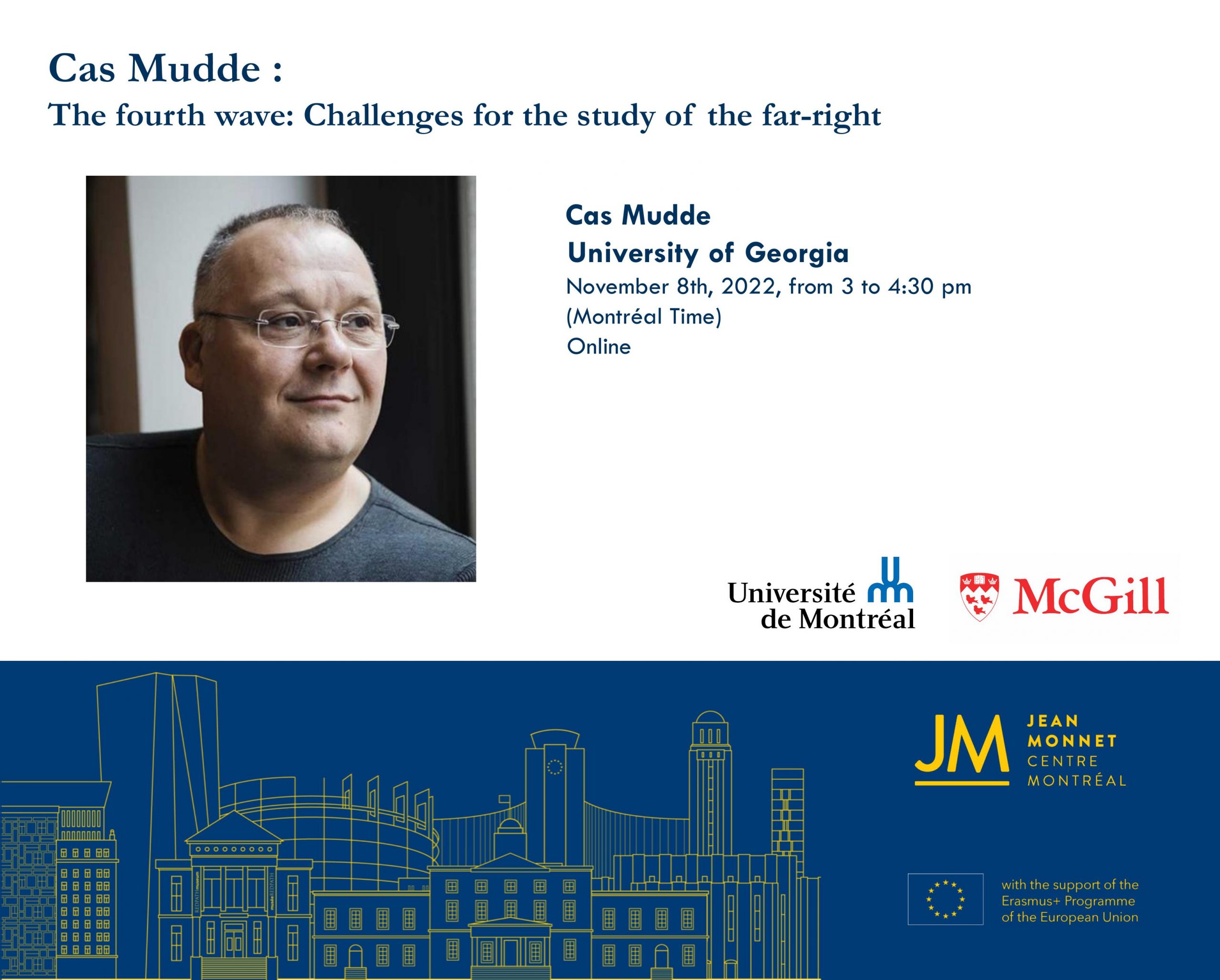 As part of the 2022 Speaker Series at Jean Monnet Centre Montreal, Professor Cas Mudde (Stanley Wade Shelton UGAF Professor in the School of Public and International Affairs at the University of Georgia) presented his talk “The fourth wave: Challenges for the study of the far-right.” Discussing some of the implications of the far right in European politics, Cas Mudde recalls that authoritarianism, nativism, and populism remain the cornerstones of the far right in the fourth wave, which began in the early 21st century. What has changed, however, is the normalization of far-right parties and, more importantly, the relationship between these parties and mainstream parties.

As Professor Mudde first points out, it is difficult to speak of one far right because of the extreme heterogeneity within the political family. The fourth wave is rather a plural phenomenon, with a wide range of electorates, leaderships, and ideologies. To illustrate his point, Professor Mudde examines the different positions on gender. Although the far right has shifted from a masculine to a more feminine phenomenon, as evidenced by the leadership of Giorgia Meloni in Italy, sexism remains inherent in the far right. There is a duality between the persistence of sexist attitudes within certain parties and a fringe of the electorate, and the promotion of benevolent sexism by others, where women are perceived as equals in their own space. This duality can be embodied in the concept of feminonationalism, where the far-right support gender equality, but only in opposition to immigration. These different approaches on gender within the far-right political family show that far-right parties can be ideologically different.

Observing the increasing mainstreaming of issues, frames, and position of the far right, Professor Mudde later argues that far-right policies are no longer limited to far-right parties, as they are experiencing electoral success and are more involved in coalitions at the national level. This spillover can be observed in the emphasis placed on social-cultural issues such as immigration and multiculturalism in mainstream party discourse. The distinction between the traditional right and the far right is thus complexified, given the shifting, even blurring, of the boundaries between these two political families.

Noting these challenges posed by the fourth wave, Cas Mudde concludes by presenting a new research agenda on the far right(s). On the one hand, with the extreme heterogeneity, it becomes more relevant to focus on comparisons within far-right parties and between sub-groups, as it allows us to explain national and temporal differences in the progression of the far right in Europe. On the other hand, the mainstreaming of the far-right invite us to revisit the concepts of traditional and challenger parties. As the contagion effect of radical right-wing policies tends to blur the distinction with mainstream parties, scholars must focus on the effects that the far right has on politicians, political parties and voters. This means changing the research angle by considering the far right not as a consequence of a certain political environment, but rather as the cause of new political phenomena